Ad blocker detected: Our website is made possible by displaying online advertisements to our visitors. Please consider supporting us by disabling your ad blocker on our website.

The Law 14 and 15 application guideline will be operational for all competitions commencing after 1 July, 2020 and reinforces the application of current law for what is a complex and dynamic facet of the game.
...
Tackler (Law 14): 14.5 – must a) Immediately release the ball and the ball-carrier after both players go to ground and b) Immediately move away from the tackled player and from the ball or get up.

Ball Carrier (Law 14): 14.2 – Being brought to ground means that the ball-carrier is lying, sitting or has at least one knee on the ground or on another player who is on the ground. 14.5 – Tacklers must: d) Allow the tackled player to release or play the ball.

First arriving player (Law 15): 15.11 – Once a ruck has formed, no player may handle the ball unless they were able to get their hands on the ball before the ruck formed and stay on their feet. 15.12 – Players must endeavour to remain on their feet throughout the ruck.

Other arriving players (Law 15): 5 – An arriving player must be on their feet and join from behind their offside line. 6 – A player may join alongside but not in front of the hindmost player. 10 – Possession may be won either by rucking or by pushing the opposing team off the ball.

World Rugby has produced a comprehensive visual guide, including video explanations, for the rugby community on itsmulti-lingual laws website, http://laws.worldrugby.org/en/guidelines.

World Rugby Chairman Sir Bill Beaumont said: "The breakdown is the most dynamic facet of the game and it is increasingly difficult to referee, but just as importantly, it is responsible for nine per cent of match injuries.
"Therefore it was important that we looked to identify ways to reduce the risk of injury, while promoting a fair contest for the ball.
"The group looked at a range of potential solutions, including potential law trials, but they unanimously agreed that the best practical and evidenced approach is to reinforce existing law, rather than law change.
"In particular, there will be focus on the ball carrier playing or placing the ball immediately, the tackler releasing immediately, rewarding the player who wins the race to the contest, penalising side entry and players who dive, not drive, into rucks."
World Rugby will be rolling-out education to its international referee panel on the change in emphasis and collaborating with international teams and unions to ensure alignment.
Editors' Notes
At the start of the new Law Review cycle (2019-23), the Rugby Committee and Law Review Group requested that a specialist breakdown group was formed. This group met via teleconference in September 2019 and then face-to-face in March 2020.

The amended law will now read: The post protector is no longer an extension of the goal-line and therefore Law 8.2 (a) will read: A try is scored when the attacking player is first to ground the ball in the opponents’ in-goal.
- «Quando l'uomo pianifica, Dio ride» (proverbio yiddish)
- "Non torneremo alla normalità, perché la normalità era il problema"
Top

Secondo me a jpr non piacciono 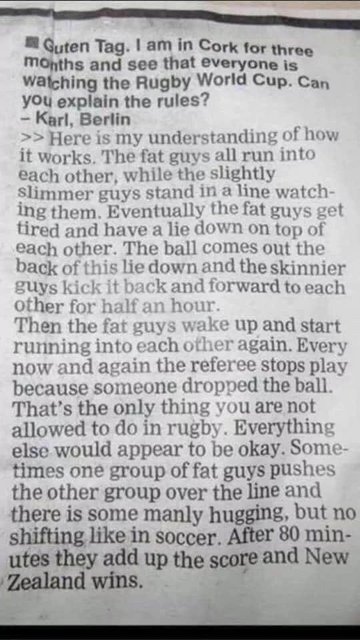